Most architects don’t know how to price construction jobs.

Contractors and engineers know how, they just rarely have the time to do so.

So they can either look for estimating companies to price projects, or they can do it themselves. Doing it themselves requires some background knowledge and understanding of how construction works in real life.

That’s why here we’re going to go over the main things to consider when calculating construction costs for projects, whether you’re an architect, engineer, or a neighborhood contractor.

Let’s get into it.

The first thing to get straight when it comes to estimating construction costs is to figure out where you’re going to perform the takeoffs on. Most contractors unfortunately still print out plans, take out their ruler, their calculator, and a pencil, and start measuring items one by one.

Not only does this consume an unnecessary amount of time that holds contractors from succeeding in their business, but it also isn’t as accurate as a digital takeoff. 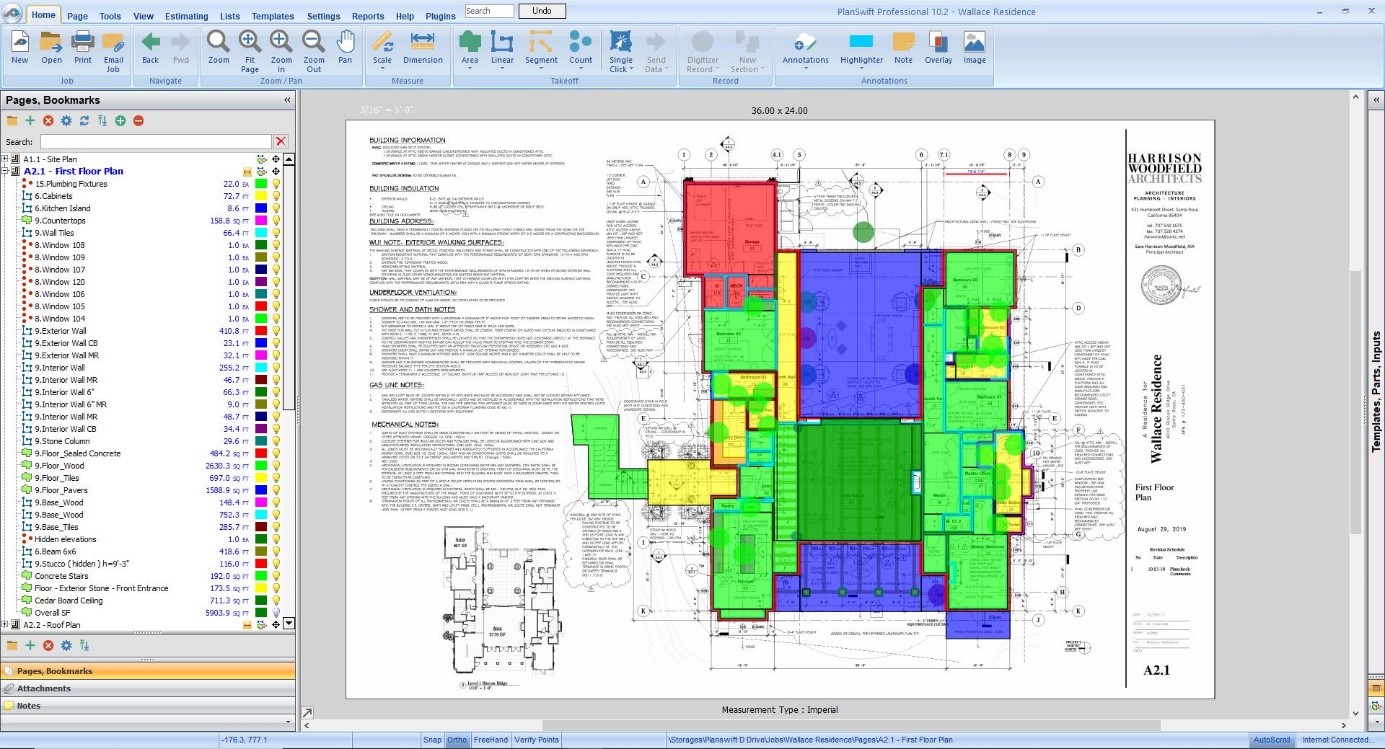 It doesn’t matter how accurate your pricing and estimating is if your takeoff calculations aren’t as accurate as possible. Digital takeoff software automatically measures the length and area of different sections within projects, all with a couple of clicks.

It’s not uncommon for projects estimated by hand to take 3 whole days whereas the same estimate done digitally would take 8 hours or less and be much more accurate.

When people need construction work done and they don’t have someone to directly go to, they usually put it up for bidding.

They invite a select number of contractors that can potentially work on the job and send them all invitations to bid. Then, the contractor with the most perceived value wins the job. This includes having an accurate estimate and offering the most attractive service.

Pricing varies from city to city. For example, many areas in the US have union laws that cause labor prices to be higher than the national average. There are many other laws, practices, and different market values in certain areas that affect the pricing of certain items.

That’s why any contractor, engineer, or architect estimating the cost of something should do it based on the zip code of the project. This way it’s highly tailored to that specific area and has a greater chance of being as accurate as possible.

A lot happens on the job site, from difficult field conditions to a lack of space for equipment, these sorts of things are mostly unforeseen in the estimating process.

Because after all, who can predict that painting contractor actually did the entire interior the wrong color and now they need to redo everything. Construction job sites are unpredictable.

This is why the estimating process needs to accommodate for these sorts of things, as they happen very often on the job site.

Some examples of things on the job site that cause fluctuations in the pricing are:

These are things that can catch inexperienced contractors off-guard, but a good estimate will accommodate for these unforeseen changes to the scope of work.

As stated above, the job sites for construction jobs are very unpredictable. In a perfect world, a construction job can be completed without change orders or arguments with contractors about work. Obviously, things like these are not only unrealistic, they’re almost impossible to achieve.

That’s critical to understanding how to estimate construction costs.

If you go out and hire a construction estimating consultant to help you estimate the price of projects, they most likely will tell you the same thing.

These are things that don’t occur to the average contractor, engineer, or architect. Most construction professionals perform takeoffs and price things to the tee of their takeoff calculations without accounting for what happens in the real world.

Get to know the job site, get to know the people working on the project. Understand the work and be sure to add cushions in your pricing to accommodate for potential issues.

A preliminary estimate is a budget for a project that doesn’t have completed plans yet.

These end up being ballpark numbers most of the time, as since the project is so early in it’s process it’s very hard to predict exactly what everything will cost.

But with a location-specific pricing database, and blueprint takeoff service (optional), you can get a surprisingly accurate price for any preliminary project.

To make it work, you need a set of drawings that are scaled and give a rough overview of the job. Like where the grade beams are, the square footage of the area, or the height of the walls. Then you would perform takeoffs that follow the process of construction and then tap into a price database to give predictable prices. For example, houses usually have 16 OC, 20 GA, 5 3/8” drywall, so you can use the pricing for that in your takeoff. The same applies to ceilings, as they most likely will be drywall (when’s the last time you saw acoustical ceilings in a house?).

On average, the price of houses is about $150/sq. ft, and for commercial projects, it’s about $175/sq. ft. These obviously vary according to the individual job, but it’s a good benchmark to get a ballpark number for projects.

During the design development phase, the architect and owner sit down and put the owner’s ideas on paper. They plan out the materials and details in the project and then eventually the contractors will bring those ideas to life.

Since the plans detail what items to include, all that’s needed is to perform takeoffs for specific items using digital takeoff software, and then plugging them into a pricing database.

Estimating construction costs is an entire industry in itself. It’s the key to ensuring projects run as smoothly as possible.

If you have any construction projects you need to be estimated, feel free to reach out to us. We do estimates of all types for construction professionals all around the USA. Check out some of our featured estimates for more info.

Ready to start your project?